Late President of Poland Lech Kaczyński worked until the very last moment on the speech that he was to deliver in the Katyn Forest on the 70th anniversary of the Katyn Genocide. He was killed on his way to Katyń in the still unexplained airplane crash in Smolensk, near Katyn, on April 10, 2010.

Let his message, supressed so brutally by his death in the 2010 Smolensk Crash, at last resound with full force – loud and clear – on the 80th Anniversary of the Katyn Genocide. 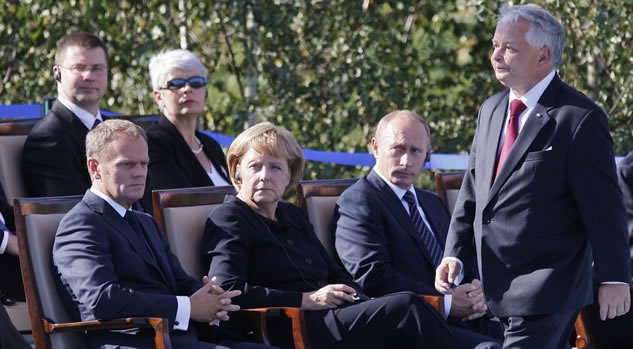 That was 70 years ago. They were killed – earlier restrained – by a shot to the back of their head. Yes, to make sure there is not too much blood. Later – still with eagles on uniform buttons – they were placed in deep pits. Here, in Katyn, there were 4.4 thousand such deaths. In Katyn, Kharkiv, Tver, Kiev, Kherson and Minsk – 21,768 in total.

The murdered are the Polish citizens, people of different denominations and professions; military, policemen and civilians. Among them are generals and ordinary policemen, professors and village teachers. There are military chaplains of various denominations: Catholic priests, the chief rabbi of the Polish Army, the chief Greek Catholic chaplain and the chief Orthodox chaplain. All these crimes – committed in several places – are symbolically called the Katyń massacre. They share the common theme – the citizenship of victims and the same decision of the same perpetrators.

The crime was committed according to the will of Stalin, on the order of the highest authorities of the Soviet Union: Political Bureau of the WKP (b). The decision is made on March 5, 1940, at the request of Lavrenti Beria: shoot! In the justification of the order we read: they are hardened, not promising improvement, enemies of the Soviet power.

These people were killed without trials and without sentences. They were murdered in violation of the laws and conventions of the civilized world. What is the death of tens of thousands of people – citizens of the Republic of Poland – without a court? If this is not a genocide, then what is?

We ask, we do not stop asking: why? Historians point to the criminal mechanisms of communist totalitarianism. Some of his victims lie nearby, also in the Katyn forest. These are thousands of Russians, Ukrainians, Belarusians, people of other nations. However, the source of this crime is also the Molotov-Ribbentrop Pact, leading to the fourth partition of Poland. They are Stalin’s imperial, chauvinistic intentions. The Katyn Massacre is – wrote about it excluded from the death transport at the last moment prof. Stanisław Swianiewicz – part of the campaign (…) to clear the foregrounds for the further expansion of Soviet imperialism. It is a key element of the plan to destroy free Poland: a state standing – since 1920 – on the path of the conquest of Europe by the communist empire. This is why the NKVD is trying to win over prisoners: let them support their conquest plans. Officers from Kozielsk and Starobielsk choose honor instead, they are loyal to their homeland. That is why Stalin and his Political Bureau, taking revenge on the unconquerable, decide: shoot them. Their graves are the pits of death in Katyn, near Kharkov, in Mednoye. These pits of death are to be also the grave of Poland, the independent Commonwealth (of Poland). In June 1941, Germany strikes the USSR: the allies from August 1939 become deadly enemies. The USSR becomes a member of the anti-Hitler coalition. The Moscow government is restoring – under the agreement of July 30, 1941 – relations with Poland. Stalin sits alongside Roosevelt and Churchill in the big three.

Millions of soldiers of the Red Army – Russians, Ukrainians, Belarusians, Georgians, Armenians and Azeris, inhabitants of Central Asia – give their lives in the fight against Hitler’s Germany. Americans, British, Poles and soldiers of other nations also die in the same struggle. Let us remind you: we, the Poles, were the first to oppose Hitler’s army militarily. We fought Nazi Germany from the beginning to the end of the war. At the end, our soldiers make the fourth largest army of anti-Hitler coalition. Poles fight and die on all fronts: in Westerplatte and near Kock, in the Battle of Britain and Monte Cassino, under Lenino and Berlin, as partisans and in the Warsaw Uprising.

Among them are brothers and children of the victims of Katyn. In the bomber of the Polish Armed Forces over the Third Reich, 26-year-old Alexander Fedorońko, the eldest of sons of Szymon Fedorońko murdered in Katyn – the chief chaplain of the Orthodox religion of the Polish Army, dies. The youngest son, 22-year-old Orest, fell while fighting in the ranks of the Home Army on the first day of the Warsaw Uprising. His 24-year-old brother Wiaczesław, fighting in the Home Army Grouping “Gurt”, is killed 17 days later.

In May 1945, the Third Reich lost the war. Nazi totalitarianism is falling. Soon we will celebrate the 65th anniversary of this event. For our nation, however, it was a bitter, incomplete victory. We found ourselves in the Stalin’s sphere of influence and under totalitarian communism. After 1945, Poland exists but without independence. With an imposed system. Efforts are made to falsify our memory of Polish history and Polish identity.

An important part of this attempt at falsifying (the history) was the Katyn lie. Historians even call it the founding lie of the PRL. It has been in force since 1943. It is in connection with this lie that Stalin breaks relations with the Polish government. The world was to never find out. Families of victims were deprived of the right to public mourning, to mourn and commemorate their loved ones with dignity. On the side of the lie stands the power of a totalitarian empire, stands the state apparatus of the Polish communists. People telling the truth about Katyn pay a high price for it. Also students. In 1949, for the truth about Katyn shouted out in classroom, a 20-year-old student from Chełm, Józef Bałka, is sentenced to prison by a military court for three years. Could – I recall the poet’s words – the unbending buttons found here, in the Katyn graves, were to remain a witness?

However, there are also relentless people and – after four decades – the totalitarian Goliath is defeated. The truth – this ultimate weapon against violence – wins. Just as the Katyn lie was the foundation of the Polish People’s Republic, the truth about Katyn is the foundation of the free Poland. It is to a large extent thanks to the Katyn Families. Their fights for the memory of their loved ones, and thus also for the memory and identity of Poland. It is thanks to the youth. Students like Józef Bałka. It is thanks to those teachers who, despite the prohibition, told the children the truth. Thanks to the priests, including Monsignor Zdzisław Peszkowski and the priest Stefan Niedzielak murdered in January 1989 – the initiator of the erection of the Katyn cross at the Powązki cemetery. Thanks to printers of illegal publications. Thanks to the many independent initiatives and Solidarity. Millions of parents telling their children the true story of Poland. As the Prime Minister of the Republic of Poland aptly said here a few days ago, Poles are becoming one big Katyn Family.

I give my deepest thanks to all members of this community, especially relatives of the victims. Victory in the battle with lies is your great achievement! You have served your homeland well!
The Russians also made great contributions to the fight against the Katyn lie: activists of the Memorial, lawyers, historians and officials of the Russian state who bravely exposed this crime to Stalin.

Katyn and the Katyn lie have become a painful wound in Polish history, but also poisoned relations between Poles and Russians for decades. It is impossible to build lasting relationships on a lie. A lie divides people and nations. Brings hatred and anger. That’s why we need the truth. The arguments are not evenly spread, those who fight for freedom are right. We Christians know this well: truth, even the most painful one, liberates. It unites. It brings justice. It shows the way to reconciliation.

Let’s make sure that the Katyn wound can finally heal and disapear. We’re on this road. Despite various fluctuations and tendencies, there much more truth about the Katyn massacre today than it was a quarter century ago. We appreciate the actions of Russia and Russians that serve this truth, including this Wednesday’s visit of the Russian Prime Minister in the Katyn forest to the graves of the murdered. However, the truth needs not only words but also actions.

All documents regarding the Katyn massacre shall be disclosed. The circumstances of this crime must be thoroughly investigated and explained. We need here in Katyn, talks among young people: Polish and Russian, Ukrainian and Belarusian. It is important that the innocence of the victims is legally confirmed, that the Katyn lie disappears forever from public space. We should proceed on the path that brings our nations closer together, without stopping or stepping back. However, this path to reconciliation requires legible signs. On this path we need partnership, a dialogue among equals, not imperial longing. We need to think about common values: democracy, freedom, pluralism, and not – zones of influence.

Katyn massacre and the fight against the Katyn lie represents an experience important for subsequent generations of Poles. It’s part of our history. Our memory and our identity. However, this is also a part of the history of all of Europe and the world. This is a message about everyone and all nations. Concerning both the past and the future of human civilization. The Katyn massacre will always remind us of the threat of enslavement and destruction of people and nations. About the power of lies. However, it will also be a testimony that people and nations can – even in the most difficult times – choose freedom and defend the truth.

Let us pay homage to the murdered: let us pray over their graves. Glory to the heroes! We honor their memory!”

See “The President” Documentary below

Resolution Commemorating the 80th Anniversary of the Katyn Genocide