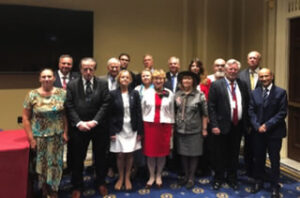 The leading motto of the conference was a quote by Dorothy Height: “the greatness is not measured by achievements but the ability to overcome obstacles in achieving the goals.” This wise quote perfectly reflects the greatness of Poland and the Polish people in the post-partition period and provides timeless inspiration for overcoming hardship. The unwavering Polish spirit in the fight for independence of Poland was also emphasized at the conference by American guests of honor.

Senator Tammy Duckworth of Illinois, who is a Iraq war veteran, underlined the important role played by Americans of Polish descent in the United States Army, in particular in the Illinois Army National Guard. It is the US Army Illinois National Guard that prides itself on the longest partnership cooperation with the Polish Army. Senator Duckworth stressed that thanks to her close relationship and friendship with many Americans of Polish descent she learned the rich history of Poland and learned a lot from the Polish history. She also emphasized that the close bond between Poland and the United States is important for both countries.

Brad Wenstrup who represents Ohio 2nd Congressional District in the House of Representatives of the US Congress congratulated Poland on the centennial of regaining independence. “The greater the challenges, the greater the reward,” said Congressman Wenstrup. “I do not know many countries on this earth that had to endure as many challenges as Poland has. You think it is bad enough that you are under Nazi (Germany) rule. And the war is over. Nazi (Germany) is defeated. And what you get? The Communism rule. Well, I guess it is not even a bad luck. There is no luck at all. This is what the people of Poland have endured, and they did it so proudly and so bravely.”

On behalf of the organizers, Maria Szonert, President of Libra Institute, stressed that on the 100th anniversary of Poland’s regaining independence, Polish Americans gathered on Capitol Hill to pay tribute to their ancestors, both Poles and Americans, who had a bold vision for Poland’s revival from abyss of history. They showed great courage and determination in implementing this ambitious far-reaching vision. “Thanks to their heroic efforts, the Polish people were able to defend and preserve their national identity, heritage, their language, culture, traditions and religion,” said Szonert. “They passed to the next generations Poland independent, just, prosperous and beautiful. Today, it is our duty to protect this treasure given to us by our ancestors, so that we will be able to pass such Poland to future generations,” Szonert said.

Seven speakers made presentations at the conference, drawing attention to the most important events in the history of Poland from the last century. Peter Sawicki from Canada, a laureate of the 2018 historical essay competition sponsored by the Polonia Institute, presented a paper on the Polish-Bolshevik War and the Battle of Warsaw. Judge Aurelia Pucinski from Chicago presented addressed the Katyn Massacre. Rich Widerynski from California gave a presentation on the Siberian Gehenna. Stephen Gilbride, son of a Polish victim of German concentration camps, presented the fate of Poles under German occupation. Stanislaw Sliwowski, President of the Coalition of American Polonia, signaled the problem of German war reparations. Wojciech Mazur from Connecticut and former activist of the Solidarity underground from Gdansk presented an essay on the Solidarity Movement. Maria Szonert addresses the problem of dangers that threaten Poland’s independence in the 21st century. More information about the conference, including presentations and video recordings, will be posted at librainstitute.org.

Remarks by Senator Tammy Duckworth of Illinois at the conference “Poland Reborn – 100 years of Struggle and Glory.” September 7, 2018, Capitol Hill. 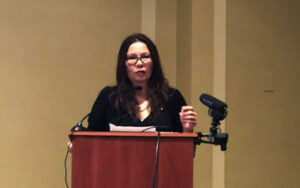 Remarks by Congressman Brad Wenstrup of Ohio at the conference “Poland Reborn – 100 years of Struggle and Glory.” September 7, 2018, Capitol Hill. 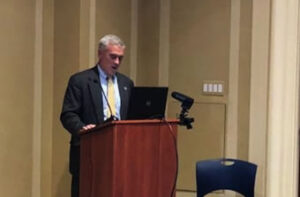