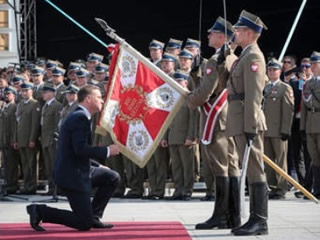 Whereas, following the signing of the Molotov-Ribbentrop Pact of August 23, 1939 with the secret protocol to divide Poland between themselves /1, Nazi Germany and the Soviet Russia invaded Poland;

Whereas, upon defeating Poland, Nazi Germany and the Soviet Russia partitioned Poland and signed Treaty on Friendship and the Border with a secret supplemental protocol to inform each other and closely collaborate in ‘liquidating” any Polish resistance “in embryo;” /2

Whereas, the Soviet Russia and the Third Reich cooperated closely in the aftermath of the invasion of Poland. At a conference in Brest Litovsk on November 27, 1939, representatives of NKVD and SS discussed the methods of cooperation in liquidating Polish people and destroying Poland. The NKVD and SS continued this cooperation at subsequent conferences held in Lwów, Zakopane and Kraków. In March 1940 both aggressors implemented parallel genocidal operations against the Poles: Katyn Operation on the Soviet side of the partition line and Special Pacification Operation known as Action AB on the German side;

Whereas, on March 5, 1940, the Soviet Politburo issued an order stating that there were 14,735 Polish officers held in various prisoner-of-war camps who were “more than 97% Polish by nationality,” and ordered the NKVD to carry out a mass shooting of 14,700 of these Polish prisoners-of-war and 11,000 Polish civilians arrested on the territory conquered by the Soviet Union;

Whereas, in April and May 1940, the Soviet Russia carried out systematic mass murders of Polish officers held as POWs and patriotic elements of the Polish society held in Soviet prisons in numerous locations throughout the Soviet Union. Only one such location was discovered soon after the crime and became known to the world as the Katyn Massacre. Those murdered in other locations were identified only after the demise of the Soviet Union, some have not been identified to this day;

Whereas, in April 1940 the NKVD deported families of the murdered Polish prisoners-of-war to Kazakhstan pursuant to March 2, 1940 Resolution of the Soviet Political Bureau of the VKP(b). This was just one of four mass deportations of Polish people from the conquered Polish territory into the depths of the Soviet Union conducted between February 1940 and June 1941, impacting about one million people according to the Polish sources. /3 Mass deportations of the Polish people constituted an integral part of the Soviet 1939-1941 genocidal actions undertaken against ethnic Poles, hereinafter called “Katyn Operation;”

Whereas, the Katyn Operation was one of several mass extermination operations conducted against ethnic Poles by the Soviet Russia during the Stalinist era. In the 1937 Polish Operation, the Soviets sentenced 139,835 Soviet citizens of Polish descent, summarily executed 111,091 Poles, and resettled thousands of them pursuant to NKVD Order No. 00485 of August 9, 1937. It was the largest ethnic murder and deportation operation during the Great Purge, and the largest extermination of ethnic Poles in history outside of an armed conflict;

Whereas, the Soviet Union continued the genocidal policy towards ethnic Poles after World War II. In July of 1945, Soviet forces conducted the Augustów Operation in north-east Poland, rounding up 2,000 people. About 600 of them disappeared without a trace. They are presumed to have been murdered and buried in an unknown location in present-day Russia or Belarus. Their remains have not been located to this day;

Whereas, in December 1949 Raphael Lemkin, who formulated the crime of genocide, invoked the Katyn crime as an example of the crime of genocide /4. In 1950, Judge Gunther testifying at a hearing before the Senate Subcommittee on the International Convention on the Prevention and Punishment of Genocide submitted a statement from the President of the Polish American Congress that described the Katyn forest massacre as “one of the most heinous genocides of modern times.” Hon. Gunther also reported that “millions of Poles throughout the world are still mourning the losses of those who were victims of Nazi (Germany) genocide in Auschwitz and of Soviet genocide in Katyn;” /5

Whereas, in the 1951 Written Statement on the Reservations to Convention on Prevention and Punishment of Crime of Genocide, the United States declared that “the Roman persecution of the Christians, the Turkish massacres of Armenians, the extermination of millions of Jews and Poles by the Nazis are outstanding examples of the crime of genocide;” /6

Whereas, on September 18, 1951, the United States Congress established the Select Committee to Conduct an Investigation and Study of the Facts, Evidence, and Circumstances of the Katyn Forest Massacre. In its July 2, 1952 Report, the Committee recognized the Katyn massacre as one of the most barbarous international crimes in world history and recommended that the Soviets be tried before the World Court of Justice for the crime of “Katynism” that is a definite and diabolical totalitarian plan for world conquest;

Whereas, in 1993 the Committee of Experts of the Main Military Prosecutor’s Offices of the Russian Federation concluded that the Katyn crime was an act of genocide under international law /7. The August 2, 1993 statement signed by all members of the Committee read: “The murder . . . of Poles has all the characteristics of genocide, the responsibility for which lies with Stalin, Beria, Molotov, Voroshilov, Mikoyan, Kalinin, Kaganovich, Merkulov, Kobulov, Bashtakov and other individuals who committed the murder in practice;”

Whereas, After the 1990 admission that the Soviet Russia committed the Katyn crime, the government of the Russian Federation refused to declassify and disclose all of its official records pertaining to the Katyn crime and release complete lists of the victims and perpetrators. Instead, the policy of minimizing, distorting and justifying the Katyn crime was implemented;

Whereas, in 2011 Hon. Dennis Kucinich, member of US House of Representatives, stated that Katyn was aimed at eliminating “the very idea of Poland … to exterminate the people and the memory of the people…” Hon. Kucinich reminded us that “Katyn presents a moral crisis to this day” because the moral calculus with respect to Katyn has not been worked out. “We look back at Katyn as a marker in human history that has not yet been fully inscribed,” he said. /8

Whereas, the Elie Wiesel Genocide and Atrocities Prevention Act of 2018 (Public Law 115–441) establishes that atrocities prevention represents a United States national interest, and affirms that it is the policy of the United States to pursue a United States Government-wide strategy to identify, prevent, and respond to the risk of atrocities by “strengthening diplomatic response and the effective use of foreign assistance to support appropriate transitional justice measures, including criminal accountability, for past atrocities;”

Whereas, to this day Katyn remains the crime without punishment. Impunity encourages the killers and poses risk of new massacres occurring once the killers realize that the outside world does not care;

Whereas, Poland and her people were the faithful allies of the United States during World War II;

Whereas, thousands of families of the Katyn victims have since made their homes in this country. Approximately 10 million of US citizens are of Polish ancestry, millions of our citizens have close ties with the families of the victims, and Katyn monuments accentuate the landscape of many American cities.

Now, therefore, be it resolved that We, the Polish Americans:

1. honor the lives and legacies of the approximately 22,000 Polish prisoners-of-war and civilians brutally murdered by the Soviet NKVD, and thousands of their family members and other Polish civilians deported in the most inhumane conditions to the depths of the Soviet Union in the Katyn Operation 80 years ago;

3. recognize that the systematic mass murders of the Polish people, conducted pursuant to the order of March 5, 1940 issued by the Soviet Politburo and implemented in conjunction with 1940-1941 mass deportations of the Polish people from lands conquered by the Soviet Union, raise to the level of the crime of genocide that requires appropriate transitional justice measures under the Elie Wiesel Genocide and Atrocities Prevention Act of 2018;

4. urge the Government of the Russian Federation to fully declassify and disclose all official records pertaining to the Katyn genocide and stop denying, distorting and justifying this grave international crime;

5. recognize that it is in the national interest of the United States to assure proper international recognition of the Katyn Genocide, to support disclosure of the full truth and the establishment of a comprehensive historical record of this grave atrocity;

6. call on the Government of the United Sates to analyze political and moral ramifications of the denial of justice to the Katyn victims, including the impact of impunity for the Katyn genocide on the modern-day international peace and security, and implement appropriate measures in order to protect the truth, seek justice, and prevent the crime of Katynism from reoccurring;

7. encourage education and public understanding of the facts and circumstances of the Katyn genocide, including the Katyn crime, Katyn lie, cover up, and conspiracy of silence;

8. call for protection of memorials and monuments honoring the memory of the Katyn victims.

Sources in support of this Resolution:

1. Secret Additional Protocol to Treaty of Nonaggression Between Germany and the Union of Soviet Socialist Republics of August 23, 1939. avalon.law.yale.edu/20th_century/addsepro.asp

4. Anton Weiss-Wendt, (2019) “When the End Justifies the Means: Raphaël Lemkin and the Shaping of a Popular Discourse on Genocide,” Genocide Studies and Prevention: An International Journal: Vol. 13: Iss. 1: 173-188; scholarcommons.usf.edu/gsp/vol13/iss1/15.

6. Reservations to Convention on Prevention and Punishment of Crime of Genocide, Advisory Opinion, Written Statement of the United States of America, 1951 I.C.J. 25 (May 28).

7. The Committee of Experts included lawyers, Boris Topornin (member of the Russian Academy of Sciences, director of its Institute of Law and the State) and Aleksandr Yakovlev (head of the Department of Criminal Law and Criminology at the Institute), as well as representatives of other disciplines, Inessa Yazhborovska (historian), Valentina Parsadanova (historian), Yuriy Zoria (military sciences) and Lev Belayev (medical sciences). The text of this decision is available in Anna Dzienkiewicz ed. “Rosja a Katyn,” Karta, (2010), pp, 48–108. See also: Karol Karski, “The Crime of Genocide Committed Against the Poles by the USSR Before and During World War II: An International Legal Study,” Case Western Reserve Journal of International Law,·Vol.45·2013, p.719; scholarlycommons.law.case. edu/cgi/viewcontent.cgi?article=1078&context=jil

See “The Soviet Story” Documentary below: