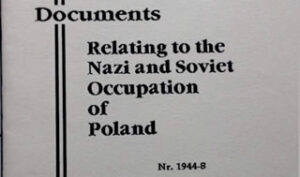 On September 1, 1939, the Germans began World War II by their attack on Poland. Five long years separate us from these events. Some circumstances accompanying the outbreak of this war have already become dim in our memory.

On the other hand, however, in the perspective of time past these incidents acquire certain clarity. Today we all know that this war had nothing to do with the building of a highway linking Germany with East Prussia, nor with the German claims to the Polish province of Pomorze. Other factors were of far greater importance: German domination over the entire world – and her rule over free nations.

The documents reprinted from the files of the Polish, French and British Foreign Ministries show that Poland made every possible effort to prevent the outbreak of the world-wide conflict.

However, while trying to avert the war, Poland was far from the thought of meek submission to enemy’s power. It is Poland’s undeniable merit that she has become the first country to break away from the policy of endless concessions and was first who had the courage to say NO to Hitler.

The documents quoted hereafter show clearly that Poland in her international policy was faithful at all times not only to the letter, but also to the spirit of her treaties.

Faithful to her policy Poland did not allow herself to be led astray by the German proposal to take part in an attack on Soviet Russia. Despite numerous tempting proposals during the period between 1936 and 1939, Poland steadfastly refused to cooperate in any anti-Soviet plot abiding by her neutrality and striving for peace.

On August 25, 1939, Poland signed the agreement of mutual assistance with Great Britain. Like the Polish-French alliance, it became the nucleus of the pact concluded later between the United Nations against the Axis. Poland has remained faithful to all her international obligations resulting from these treaties since the outbreak of the war until this day.

Today, when the war is in its final phase, we should be mindful of the lesson we have learned from the conflict: European affairs are not distant matters and do not concern an alien territory only.

This war taught us that Danzig is not as distant from Pearl Harbor as it appears on the map. The world is small and peace is indivisible.

It Started in Poland – Book

Source: Polish Ministry of Information, Document Relatng to the Nazi and Soviet Occupation
of Poland No. 1944-8, London.