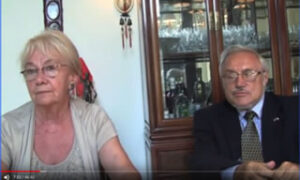 The Federation of the Katyn Families sponsored a special delegation of Katyn Families for the commemoration of the 70-tieth anniversary of the Katyn extermination of Polish POWs. A large group of Katyn family members departed Warsaw by train in the morning of April 9, 2010 for Smolensk. They arrived at the Smolensk train station in the morning of April 10, 2010, shortly before the crash of the Polish Air Force One at the Severny airport in Smolensk. Among the Katyn families were Barbara and Zbigniew Krakowscy.

Three years later, still visibly traumatized, they registered their experience from their 2010 trip to Smolensk and Katyn on the video below.

Of particular significance in their testimony is the description of the fog in Smolensk on the morning of April 10, 2010. That morning the Katyn delegation took buses from Smolensk train station to the Katyn forest. While traveling by bus from Smolensk to the Katyn forest, they discussed the fog plainly visible on the horizon. This testimony begins at 14 min of the video report. Below is an English translation of the excerpt from Barbara’s testimony:

– The bus began to move. There were several busses, about 5.

–  We go… At one point Zbyszek says: ‘Look, how strange this sky is.’ Important words were used at this moment. Please note the word ‘strange.’

– I looked and turned back. But apparently something was so striking that I looked back. I look closer and say: ‘Listen, these are not clouds. This is fog, but so strange because it moves as quickly as clouds. And its color was so gray…’

– I also used the word ‘strange’ – ‘strange fog.’ He said: ‘strange sky’ and I said ‘strange fog’ because it was moving incredibly fast. It was moving approximately in the direction… while the bus was moving forward, this was in the north-east direction.

This testimony about the fog was independently corroborated by other members of the Katyn families’ delegation. The testimony on this subject begins at 32:40 min of the video. Barbara revisits the issue of fog in Smolensk. She comments that on April 10, 2010 she didn’t talk to other people about the fog and she had an impression that only she and her husband noticed this strange fog. However in 2012 or 2013, she talked to other members of the Katyn families’ delegation and learned that others noticed this strange fog as well. She says:

– (…) last year (or this year?) at the annual Christmas Eve party when we meet with other member of the Katyn family, we talked to a gentleman, I don’t know his name because we do not know all members, we do not see each other on a regular basis, (…) he was from the Katowice branch of Katyn families.

– I saw him before but never talked with him. This time he came to us. (…) We started to talk about the Smolensk catastrophe, we mentioned this fog…

– and he said: ‘Well, well, I also saw it. And I had the same impression. I also saw this fog moving so fast.’

– This means that at least one more person saw it, not only we…

– Question: When you were at the (Katyn) Cemetery was there any fog?

– Barbara: No, there wasn’t. There wasn’t any fog at the cemetery.

– Question: While you were riding that bus, was that fog at a certain height or at the street level, at the bus level?

– Barbara: In the area where we were riding the bus there was no fog. We only saw that fog in a distance, on the horizon.

– Question: Was it at the tree level?

– Barbara: Above, above. At the sky backdrop…. Gray.

1946 Katyn Dossier of the Polish Government in London Released!