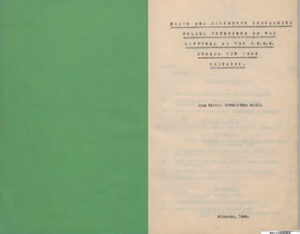 The United States National Archives and Record Administration has recently declassified a number of comprehensive Katyn-related documents from the Stalinist period. Among them is a document entitled “Facts and Documents Concerning Polish Prisoners of War Captured by the U.S.S.R. During the 1939 Campaign” prepared by the Polish Exile Government in London in February 1946. This very sensitive document was delivered to the US Embassy in London by Polish Ambassador Jozef Lipinski.

In 1950 the Counselor of the US Embassy in London, Mr. John H. Bruins, forwarded a number of documents on Katyn to the US State Department. On November 17, 1950, Bruins transmitted as Dispatch No. 2377, a copy of the “Facts and Documents Concerning Polish Prisoners of War Captured by the U.S.S.R. During the 1939 Campaign.” This document was declassified about seventy years later as part of Record Group 59 of the General Records of the US Department of State for the period 1763-2002.

This historic Dossier that consists of about 250 pages stands as a testimony to the exceptional quality of intelligence capabilities and superior analytical skills of the Polish Government in Exile. Written in excellent English, the document consists of three parts. The first part presents the situation of the Polish Prisoners of War in the USSR before 1941. The situation of Polish POWs in various camps, including Kozielsk I, II, III, Starobielsk, Ostashkov, Pavlishtchev Bor, and Griazovetz, is analyzed in-depth in eight chapters.

Part II is dedicated to the geopolitical analysis of international relations after the July 30 1941 Polish-Soviet Agreement and to a desperate search for over 15 thousand Polish POWs, including over 8,000 officers. General Anders made the following statement on the status of his efforts to find the missing POWs: “It is the fact that not one of these 8,300 officers from the camps at Kozielsk, Starobielsk nor of the 4,00 N.C.Os of the military and civil police from the Ostashkov camp, have joined the military.”

When Germany announced that the German army found mass graves of Polish POWs near Smolensk, the Polish Government in London found itself in an awkward position in relation to its Western and Soviet allies. Therefore, in reaction to the German news on discovering mass graves of Polish POWs in Katyn, the Cabinet of the Polish Government in Exile at a meeting in London on April 17, 1843, took great care of distancing itself from Germany while issuing an official statement on this matter.

After the Ministers had acquainted themselves with all information concerning the Polish Officers whose bodies had recently been discovered near Smolensk, and with the reports from Poland on this matter, and after the question had been widely discussed, the following decisions were taken:

(…) to declare that there is not one Pole who has not been deeply shocked by the news now given the widest publicity by the Germans of the discovery of the bodies of the Polish officers missing in the USSR in a common grave near Smolensk and of a mass execution of which they were victims;

The profoundly hypocritical indignation of German propaganda will not succeed in concealing from the world the many cruel and reiterated crimes that are being perpetrated against the Polish people.

The Polish Government recalls such facts as:

– the removal of Polish officers from prisoner-of-war camps in the Reich and subsequent shooting of them for political offenses alleged to have been committed ‘before the war;
– mass arrests of officers of the reserve subsequently deported to concentration camps to die a slow death. From Cracow and the neighboring district alone 6,000 were deported in June 1942;
– the compulsory enlistment in the Wehrmacht of Polish prisoners of war from territories illegally incorporated in the Reich:
– the forcible conscription of about 200,000 Poles from the same territories and the execution of the families of those who managed to escape;
– the massacre of a million and a half people by executions and in concentration camps;
– the recent imprisonment of 80,000 people of military age, officers, and men and their torture and murder in the camps of Maidanek and Treblinka.

It is not to enable Germans to make impudent claims and pose as the defenders of Christianity and European civilization that Poland is making immense sacrifices fighting and enduring suffering.  The blood of Polish soldiers and Polish citizens, wherever it was shed, cries of atonement before the conscience of the free world. The Polish Government condemns all the crimes committed against Polish citizens and refuses the right of making political capital of such sacrifices to all who are themselves guilty of such crimes.

The report concludes that the total number of inmates who passed through the three cams was as follows:

Included in this total were:

These numbers are remarkably close to the numbers released by the Russians after 1990.

Part three of the Dossier entitled “After the Katyn Revelations” consists of six chapters and deals with an appeal to the International Red Cross for help, reactions of the Allied nations to the Katyn revelations, the severing of Polish-Soviet relations, and the struggle between German and Soviet version of events.
In conclusion, the report focuses on Russian propaganda and tries to answer the question of whether the mystery of Katyn ever be solved.

The results of the Soviet investigations were published in nearly all the British and American papers as early as January 25, 1944. The articles mostly confined themselves to describing the Russian report and its conclusions, without accepting or rejecting them.

For the text of the Dossier see:  https://www.librainstitute.org/facts-and-documents-concerning-polish-prisoners-captured-by-ussr-during-the-1939-campaign/