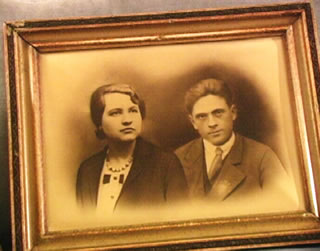 I accept this Siberian Cross Award on behalf of all those who are no longer with us but thanks to whom I am here today. Thanks to them I survived as a two-year-old child the Polish Gehenna – the harshest deportation from Eastern Poland to Siberia that began on February 10, 1940. I am eternally grateful to the following heroes:

They all supported me and each other in the most difficult conditions the human being can endure. We survived the harshest Siberian deportation thanks to Divine Providence. I do not remember these events because I was only two years old at the time, so I rely on the memoir of my Aunt Maria who was 22 years old at the time of deportations.

Most of you probably recognize my Kresy accent. I was born in Chotów near Nowogródek in 1937. My father worked as a forester. On February 10, 1940 at 2 AM, loud banging at the door awoke my parents. Bronek, my 35-year-old father, opened the door and could not utter a sound. Two Bolsheviks pointed rifles at him and ordered “roki w wierch!” We heard the voice of our neighbor – a younger Konowal – “surround the house!” The older officer read the order: “In 2 hours you must be ready, do not take anything except clothing – you are going to the Far East.”

We all were terrified. Three little children ages 6, 2 and six months. The parents wake us up, dress and give us some milk. The older Józek was so scared he kept making a sign of a cross as if seeing a devil. Jadzia that is my mother was in advanced pregnancy. It was a very cold and snowy February night. We were to go on sleigh to the train station Stołpce, about 30 kilometers from Chotów. The children were covered with quilt, blankets and pillows. We took the warmest clothing and several bags of dry food. In Stołpce we were loaded to cattle wagons. Four families were loaded to our wagon. We were locked in these conditions for two weeks without any stop and any meal. We didn’t even receive water so through the quasi window we collected snow to the bucket and melted it in a stove. We didn’t have wood to keep fire, so we had to burn boards from plank beds.

We were unloaded at the Wozyga Wologa in harsh winter weather. For children something like a sleigh “in walakuszki” was waiting. The adults had to walk in snow reaching to their waist. There was no road leading to the place of our destiny. “25 kilometers to the barracks in the forest where the eternity awaits us,” the NKVD functionary told us.

On the arrival, we received something resembling a piece of bread, “kipiatok” resembling soup, and a cube of sugar. The next day, all people were registered and adults were sent to work in the forest. They were cutting trees, cutting branches, and preparing logs for river transport. Those who worked were entitled to 500 grams of bread a day. The children were sent to “dziedsad” where they were taught communist patriotism. They would come home singing communist songs.

Shortly after our arrival my mother delivered a baby. We named her Hania. Unfortunately Hania died in less than a year. She died in the wintertime and we couldn’t even bury her properly. She was buried in the forest and only in the spring we were able to bury her again with a wooden cross over her tiny grave. That spring two other children became very sick too. They laid down for a couple of days with their eyes closed, not eating or even drinking anything. At that time my father bought somewhere a goat so the children could have some milk. That goat saved their lives. After a while, our Aunt got a job in a bakery. Soon thereafter, she became a manager there. This situation improved our living conditions considerably. In the spring we also set up some small gardens. Everything grew quickly and we had additional produce to eat.

Towards the end of 1941, the Commander of our “Posiołek” announced that we were free and we could go wherever we want. We learned that the Polish Government moved to London and negotiated with Russia to form the Polish Army from the Poles imprisoned in the USSR. We were told that the Polish Army was being formed in Uzbekistan. The Polish deportees in our Posiołek were enthusiastic. They arranged for transportation and on February 10, 1942, on the second anniversary of our deportations, we left Siberia heading south to Uzbekistan. We traveled two months in the most difficult conditions. When we arrived in Tashkent it was already spring so we sold our winter clothing.

Meanwhile the railway men attached our wagon to the Siberia bound train and we ended up in Semipalatynsk. The snow storm there was so severe that the train was stuck in the snow for days. It was a terrible encounter with freedom. Finally we ended up in Kirgizstan and were forced out of the train there. The local people took most of our people to their collective farms. But our friends bribed the station director to get two wagons that would take them to Huzarów, where the Polish Army was stationed. We went with them and ended up in Kiziltip. From there we were directed to Kermine where the 7th Infantry Division of the Polish Army was stationed.

My aunt sold her purse and got the money for transport to Kermine. We made it safely to Kermine and we rented a room in the Uzbek “kibitka” there. Thanks to the help of Father Król my aunt got a job in an orphanage that housed about 250 Polish orphans. My father joined the Polish Army there. Typhoid was spreading rapidly and we all got very sick. My youngest brother Tadeuszek died there and was buried in the sand of Kermine. In the Uzbek language Kermine means the Valley of Death.

On August 8, 1942, we left Kermine and via Krasnovodsk, in terrible conditions, we arrived at the shores of Persia, disembarking in Pachlewi. We received first aid in Pachlewi, went through quarantine there, and were transported via Teheran to Achwaz. From there we were sent via Karachi, Pakistan to Mombasa in Kenia /Africa. In Makindu we went again through quarantine and were sent to the refugee camp in Masindi in Uganda. After the war, we reunited with our father in London. At that time my father was in the Polish Air Force Cadet School in Great Britain.

Glory to the heroes who were left behind in the Inhuman Land. A cry of protest against concealing the truth about Katyn. The self-immolation of Walenty Badylak

The number of Poles murdered by NKVD in 1937 Polish Operation greater than expected!