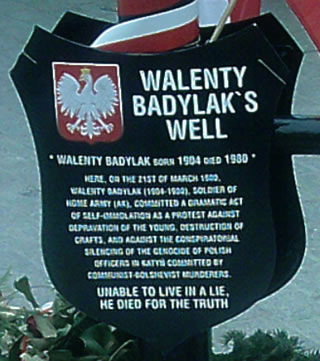 On March 21, 1980, a man burnt himself to death in the heart of Krakow. Walenty Badylak – a retired baker, a bibliophile, a few knew about him. Reporter Anna Kluz-Los tells us his story in a documentary broadcast by Polish Radio in Krakow on the 30th anniversary of the tragic event.

– From a distance it looked like a doll. I thought it was probably a happening. As I was approaching, I saw that it was not an act of acting, but that it was a man – this is how painter Andrzej ?ukaszewski described Walter Badylak’s desperate act.

On March 21, 1980, on the Main Market Square in Krakow, a retired baker, AK soldier Walenty Badylak burnt himself – self-immolated. He did it in protest against the silence over the Katyn massacre.

Anna Kluz-Los from the Polish radio station in Krakow reached the witnesses of that dramatic event. A document entitled “Sacrifice” aired on the Polish radio on the 30th anniversary of this dramatic protest of Walenty Badylak against the most insidious injustice.

Why did he do this?

– I absolutely knew that this was a political protest – said the well-known photographer Stanis?aw Markowski in the reportage. – And that something started in Poland, I just felt it with my whole body, every inch of skin.

Extremely dramatically sounds the testimony of one of the women who found a plaque explaining the reasons why the retired baker, AK soldier, committed such a desperate suicidal act. “He had an inscription, it was such a plaque on a chain,” she recalls many years later. “And there it was written: ‘They murdered my entire family in Katyn, they depraved and took away from me my son, they took over my place and turned it to a pub. My son went to technical school and they taught him how to drink vodka so that the boy did not to study anymore.’ – and she added: – “It was signed, I do not remember the first name, but last name was Badylak.

The sister of Walenty Badylak’s wife talked in a reportage about difficult moments in his life. – “He read a lot, he was very interested in literature, he was a great patriot, he was connected with the anti-communist resistance for sure,” – she emphasized.

StanisLaw Markowski, a well-known photographer was at the Main Market Square in Krakow that day. He had the camera with him by accident. He presented to the author of this documentary the photographs which he then took. He recalled the moment when he knocked at the door of one the houses with the hope that someone would open the door and let him take better pictures to immortalize this tragic moment.

– “An old lady opens the door to me, invites me in, please come in – recalled Markowski. – On the sofa there was a man who stood up and said: “Open the window quickly, take pictures please, I survived the Warsaw Uprising and lived through the hardest Stalinist times, do it, capture this tragic moment – this testimony.”

Some time later, when Stanis?aw Markowski had already left the apartment and came to the market, the communist secret service sourrounded him. However, by a happy twist of fate, he managed to break free from the hands of two SBs and hid his photographs with a friend Stanis?aw Czarniecki, in his antique store.

Anna Kluz-Los from the PR Broadcasting Station in Krakow also reached to Mr. Czarnecki. A few days before the self-immolation, Walenty Badylak bought in his store the “Konrad Wallenrod” book. – “I would like to read it again, but not because it should be considered as an example,” – Czarnecki recalls last comments of Walenty Badylak. – “Then it came to my mind that he chose a different path than Wallenrod, meaning not a trick, not an armed act, but a sacrifice of his own life – said Stanis?aw Czarniecki. – It was a decision to endure physical pain, real suffering.

Producer Jaroslaw Majka talked about the plans to make a move about Walenty Badylak.

The story about a man who years ago in such a dramatic way decided to end his life in protest against concealing the Katyn massacre as told by Anna Kluz-?o? is valid even today because the moral calculus with respect to Katyn has not been worked out to this day. Source: Polskie Radio Krakow Photo: www.krakowniezalezny.pl 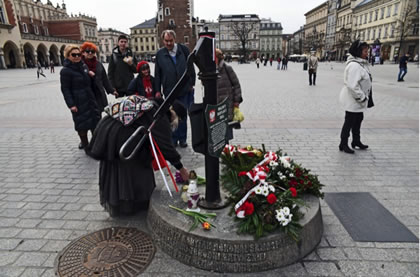 The Unveiling of the First Katyn Monument. Archival Documents from Polska Agencja Telegraficzna