Over six years have passed since the catastrophe of the Polish Air Force One in Smolensk, Russia, that killed the President of Poland, First Lady, former President-in-Exile, the entire Central Command of the Polish Armed Forces, members of the Polish Parliament, President of Central Bank, President of the Institute of National Remembrance, the legend of the Solidarity Movement Anna Walentynowicz, representatives of the Katyn families and many others. The findings of the Russian MAK report issued in January 2011 and Polish Miller report issued in July 2011 have been found inconsistent, contradictory and wrong. Conclusions of both reports that blamed the Pilot-in-Command, the Commander of Air Force and the President of Poland for the crash have been proven wrong beyond any doubt:

Yet, the majority of the Polish people as well as the world community do not want to know the truth. The renewed investigation into the Smolensk crash launched by the government of Prime Minister Szydlo after the 2015 parliamentary elections faces strong internal as well as external opposition. In Poland, former communist forces hostile to late President Lech Kaczynski not only continue to block any efforts to find out the truth about the Smolensk tragedy, but also openly appeal for the overthrow of the government of Prime Minister Szydlo. In accordance with the will of the people, her government pursues the policies of late President Lech Kaczynski, aims at administering symbolic justice for the communist crimes, and strives to conduct proper investigation into the Smolensk catastrophe. Abroad, globalist forces of radical left with close ties to former Polish communists passionately protect their comrades in Poland by discrediting the government of Prime Minister Szydlo for its effort to find out the truth on Smolensk, administer justice for communist crimes, and incapacitate pro-Moscow and pro-Berlin agents operating in Poland.

A strange alliance of Russian nationalists who aim at putting out of sight the Katyn genocide with neo-Marxist globalists of the West who aim at destroying the Polish nation state result in a combination of powerful forces from the Eat and from the West that have vested interest in blaming late President Lech Kaczynski for the Smolensk catastrophe in order to destroy his political formation. This powerful alliance, symbolized by Mr. Putin of Moscow and Mr. Tusk of Brussels/Berlin, works hand in hand to block any real investigation into the Smolensk catastrophe that took place on on April 10, 2010, on the 70th anniversary of the Katyn massacre.

The truth on the Katyn genocide of 1940 was forbidden in Poland until 1990. But the social trauma of Katyn was never cured in Poland, either before or after 1990. Thus, the trauma of Smolensk was imposed on the Polish society on top of the open and festering Katyn wound. Therefore, the Polish society was terrorized into accepting yet another historic lie and yet another conspiracy of silence with even greater ease than with respect to Katyn. Those who opposed the Russian version of events accepted by the Tusk/Kopacz government in Warsaw were brutally persecuted, publicly ridiculed and discredited, and virtually killed in the eyes of the public opinion. Those who demanded adequate investigation exposing obvious fallacies in the Russian conclusions were stigmatized as those seeking divisions and causing trouble.

The Catholic Church in Poland responded to this moral crisis with mixed signals. A part of the Church leadership was willing to sacrifice the need to seek the truth in the name of preserving peace and unity within the Polish society. But a large group of Polish bishops stood up their ground and courageously provided moral support to the Polish people during the most difficult times between 2011 and 2014, when the Tusk/Kopacz government was engaged in brutal supression of the truth on Smolensk and massive persecution of those who demanded it.

Since the day of the Smolensk catastrophe on April 10, 2010, on the 10th day of each month a commemorative mass has been concelebrated in the National Cathedral in Warsaw. Each month a different bishop delivers a major homily to the nation on the Smolensk tragedy. The commemorative monthly masses in the Cathedral of Warsaw continue to this day. However, between 2011 and 2014, the powerful patriotic homilies delivered at the monthly masses in the National Cathedral stood as the cornerstone of resistance of the Polish people in face of the horrific, demining and enslaving Smolensk lie imposed on the Polish society in the aftrmath of this tragedy. The historic homilies from the National Cathedral contributed to the 2015 electoral victory of the Law and Justice Party led by the twin brother of late President Lech Kaczynski and resulted in the formation of the government of Prime Minister Szydlo that reversed the policy of protecting and promoting the Smolensk lie.

The Smolensk Homilies presented in the National Cathedral during the darkest days of brutal suppression of the truth on Smolensk by the Tusk/Kopacz government have been published by the Libra Institute in cooperation with Wydawnictwo Archikonfraterni Literackiej. This unique book also includes the historic speech that late President Lech Kaczynski intended to deliverer at the Katyn Cemetery on the 70th anniversary of this horrific international crime on April 10, 2010. Today, this undelivered speech written by President Lech Kaczynski is more important than ever.

The Smolensk Homilies presented in the National Cathedral by the most revered Polish bishops in the darkest days of brutal suppression of the truth on Smolensk by the Tusk/Kopacz government have been published by the Libra Institute in cooperation with Wydawnictwo Archikonfraterni Literackiej. This unique book also includes the historic speech that late President Lech Kaczynski intended to deliverer at the Commemorative Mass in Katyn on the 70th anniversary of the Katyn Genocide. Today, this undelivered speech is more important than ever. 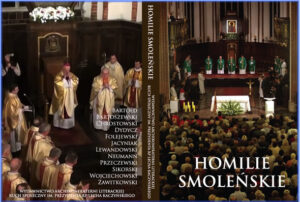 Smolensk Crash: Comparison of MAK and Miller conclusions with the reality on the crash site

Libra Institute Protests Incorrect Language in S. Res. 566 on the 80th Anniversary of the Katyn Massacre