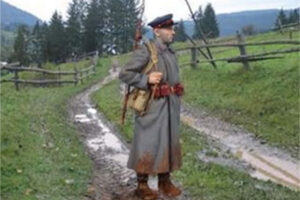 More remains of Polish soldiers have been discovered in the Ukrainian city of Volodymyr-Volynsky. They were found at a site where Casimir the Great’s castle once stood, and where later NKVD and gestapo prisons were located. The grounds were searched by Ukrainian archaeologists and volunteers of the Independence Foundation. “The remains were found under layers of rubbish, in a pit that was used in the past to dispose of ordure from a tuberculosis hospital,” said Jan Fedirko from the Independence Foundation, who took part in the expedition.

The archaeologists discovered several skulls, including one with a trace of a gunshot that went through its occiput, and many human bones. The archaeologists’ initial estimation of the remains is that they belonged to approximately 12 people.

The Independence Foundation informed the Council for Protection of Memory of Combat and Martyrdom about the discovery, and requested the exhumation of the remains. It is highly probable that the remains were of murdered Polish soldiers, due to a well-preserved eagle badge from a Polish military uniform and some Polish medals found with the remains.

Although no decision has been made yet as to the future of the excavation, Maciej Dancewicz, the director of the Foreign Department of the Council for Protection of Memory of Combat and Martyrdom, says it is soon to be expected. “Especially because the remains were found in a near proximity of the ones previously exhumed in 1997, and which proved to be of Polish soldiers killed at the site between 1939 and 1940, because of well-preserved military boots, buttons and eagle badges found alongside them,” says Dancewicz.

The site is a unique torture place described by some historians as “The Little Katyn.” It was a place where Polish and Ukrainian prisoners were murdered by Soviet intelligence agents in 1939-1941, as well as where gestapo later carried out killings of Jewish nationals.

From 1997 to 2014, scientist managed to discover remains of over 2700 people. Only last year, skeletons of 1500 people, including women and children, were recovered from 6 different pits on the site. Many skulls showed traces of gunshots and several hundred of bullet cases matching Soviet guns were discovered at the site.

According to historians, NKVD could have used the Volodymyr-Volynsky site to incarcerate Polish prisoners of war, who were forced to build fortified borders of the so called Molotov-line.

In the fall of 2014, some remains were buried at a local communal cemetery. The graves were marked with wooden crosses and enigmatic encryption of “the victims of totalitarianism.”

The Council for Protection of Memory of Combat and Martyrdom will open bids to design a monument, to be erected in Volodymyr-Volynsky to commemorate this mass murder place. An official opening of the military quarters has been initially planned for the end of 2015.